It's been a somewhat eventful month - we'll get to the crafting first. I finished the Alabama Chanin T-shirt embellished with daisies that I found on the internet (one daisy, and scattered them on the shirt). 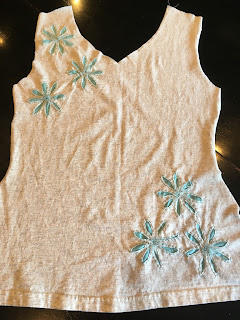 Apparently I used an old pattern, or I gained weight since I haven't been running lately, or something, because this sucker is TIGHT! 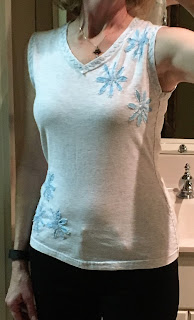 I was hoping to wear it to work, despite both boys' opinions that it looks VERY homemade due to the neck and armhole stitching, and the outside knots at the center of each daisy, but for now it has to be home only. 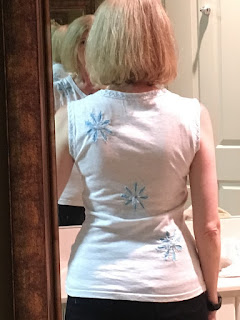 I'm thinking of adding gussets on the sides, though, to widen it at the hips, since I have more of that T-shirt material left. I think I must've meant to use a pattern from the Craftsy Sewing with Knits class that fits nicely over the hips and that I've made 2 shirts from for work. Dangit! Don't you hate it when you're in love with something until the end and then it disappoints? Very depressing. 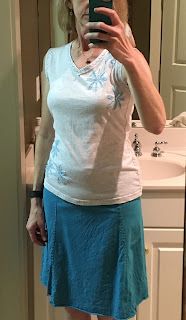 Here's a beautiful carved Indian elephant that a student gave me as a gift - one piece of wood and can you see the baby inside? Bet this guy wasn't depressed when he finished carving this! 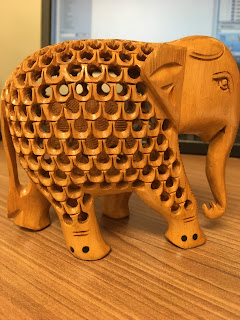 And one night we came back home at night to find 3 HUGE owls sitting on a neighbors' mailbox. They took off right in front of us, then one sat glaring at us from a tree before flying away - very cool. 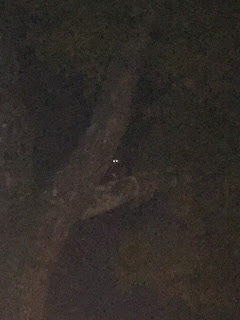 So here's our awesome Mother's Day weekend. We went to the beach and Drew's girlfriend joined us since she's gotten a summer job nearby. Lucas was truly thrilled to drive the boat - despite the face and non-chalant attitude. 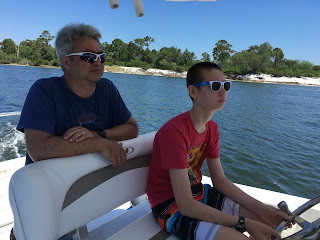 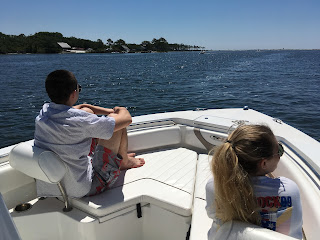 Jake jumped in and out of the boat himself, despite this also being his 11th birthday, and had fun in the water. 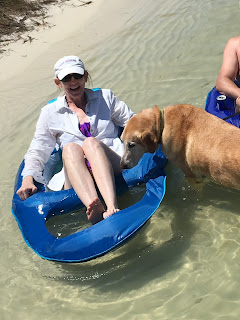 When we got home, Drew cooked teriyaki salmon with vegetables for me. 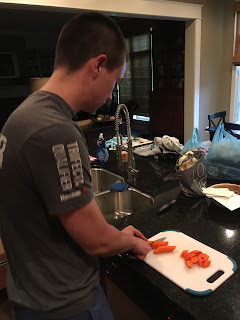 Lucas gave me a first aid kit for my purse and a jewelry holder, but I don't have a pic of them - boo. 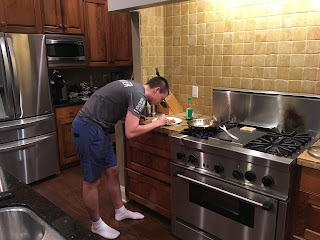 Jake was worn out, as expected, but apparently he also picked up something, because the next day he went out in the morning to pee and wouldn't come back in. He just lay on the porch and refused to get up all day, so I ran him up to the vet when I got home, and he had a temperature of 105! The hypothesis was near heatstroke due to arthritis flare from all the activity, but the x-rays and labs all showed he was perfectly healthy for his age. The poor baby wouldn't meet any of us at the door for a couple of days, and went about 5 days without eating his dog food. He did eat cheese wrapped around pain medicine, and is slowly getting back to normal, but it was pitiful to watch him avoid us and pant like he was running a marathon. 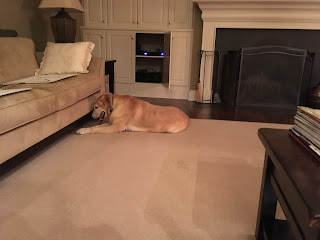 So he's more active today and actually ate his breakfast on his own - hooray! Now I'm off to rescue that shirt and figure out which pattern I should've used. Hope you're having a productive weekend!
Posted by Dr. Fun (AKA Sister) at 4:08 PM 9 comments: